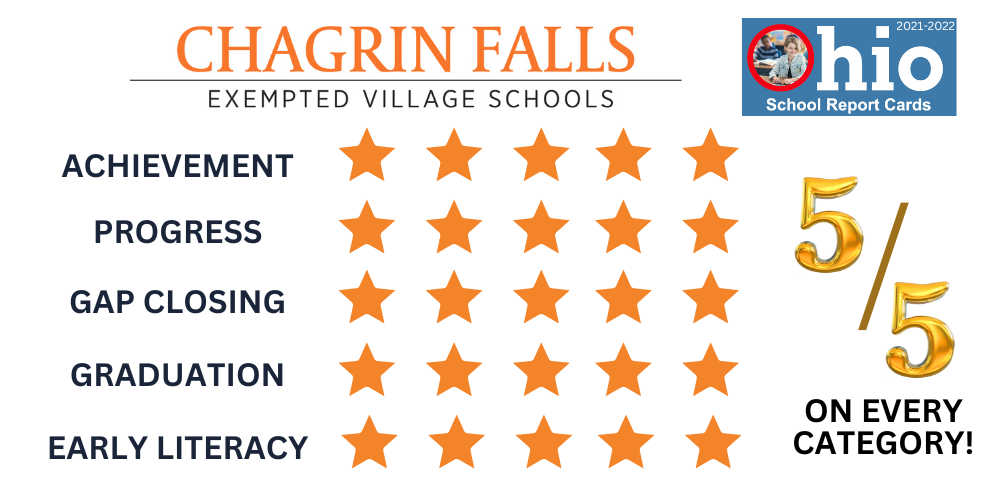 On September 15, the Ohio Department of Education released the 2021-22 School Report Cards for the more than 600 districts in the state.  Chagrin Falls Schools received five stars on every component of the report card. Five stars is the highest rating for districts.

The Ohio School Report Cards include performance information provided by schools and districts including academic, financial, and opportunity to learn data. Some of this data is then combined into six components that receive star ratings to indicate the level of performance for the school and district.

Progress - This component looks closely at the growth all students are making based on their past performances. Chagrin Falls Schools received five stars and showed significant evidence that the District exceeded student growth expectations by a larger magnitude.

“Today, we celebrate the accomplishments of the Chagrin Falls Schools’ staff, students and families,” said Superintendent Dr. Jennifer Penczarski, Chagrin Falls Schools. “A five star rating across all domains on the new Ohio Report Card is a direct result of the hard work and strong commitment to excellence from our students, staff, and school community.  Although this is only one of many metrics we use to measure our student achievement and success, we are very proud of our staff and students’ accomplishments.  The Chagrin Falls Exempted Village School District prides itself in offering the highest quality education possible that allows each student to maximize their potential.”

“The knowledge gained through this process will be used to help guide the future of our District and the strategic planning process,” said Penczarski.  “We continue to elevate our learning experiences to reach our full potential of providing each student with a world class education.”

Other statistics from the report card show that Chagrin Falls Schools . . .

“Excellence at this level doesn’t just happen.  It takes dedicated administration and staff, engaged students and support from our families and the community,” said President Sharon Broz, Chagrin Falls Board of Education. “This is a success to be celebrated by all.”

You can review the presentation given at the September 21 Board of Education regular meeting HERE.   #ThisIsChagrin #WriteTheStory